It was an exciting week on the job front.  With Endeavour up, I managed to corner some simulator time for some commander training.  This was an RTLS run, meaning the center main engine failed just after the solid rocket boosters punched off, resulting in a return to landing site.  The nice thing about this simulator load is that you get to simulate the Shuttle launch.  The bad thing is that the dynamic loads imparted on the vehicle required to return to Kennedy make for control difficulties.  The real Shuttle has, obviously, never done this; it’s questionable if it would even hold together.  You have to burn off enough propellant to be able to eject the external tank.  This unfortunately results in a lot of energy you then need to bleed off. 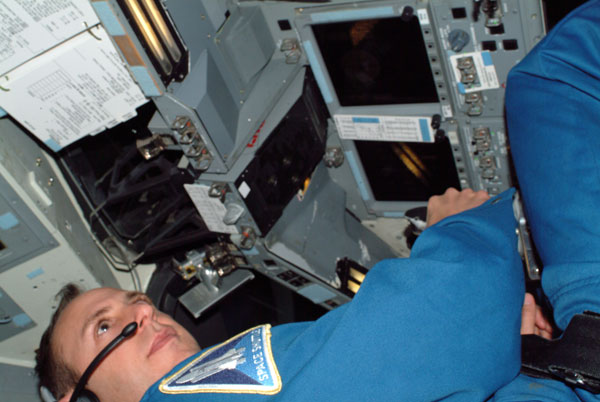 So here is a shot of me during launch.  The angle may look odd on the computer screen, but it is actually a fair representation.  The mission specialist who took the photo was in the jump seat in the aft cockpit.  Since we were in the motion-base simulator, we were strapped in and rotated up a full 90 degrees.  This means she was underneath me looking up.  The motion-base naturally can’t simulate the G-forces of launch, but it sure can shake and it has a decent audio system, so it was surprisingly realistic.  My apologies that you can’t see the telemetry on the monitors.  I had the camera flash on at this point.

The simulator instructor killed the computerized autopilot right after we punched off the external tank and dared me to make the turn back to Florida.  We were probably at Mach 11 or 12 at that point.  I really wish I could have taken a photo of the heads up display but I was a bit busy.  Essentially, you had a three-degree-of-freedom set-up.  There was a diamond inside a square.  The square would move based on computer suggestions of bank and sink angles.  The vertical stabilizer doesn’t really work at that speed so yaw is controlled with reaction control jets.  This means that the rotational hand controller handled all three axes.  This ran contrary to what you expect as a pilot, especially the way they designed the feedback system.  You twist the hand controller for yaw.  But the yaw and roll control loop is a “fly into” system and the pitch is a “fly away.”  It certainly took some time to get used to, which is not really a luxury you have in a RTLS scenario.  However, I managed to stay on the ball and soon we saw the Florida coastline in the windows. 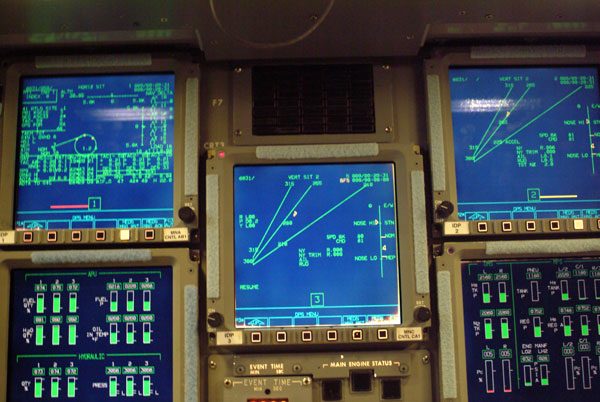 Here is a shot of the Shuttle computer screens.  This is the new glass cockpit.  On the bottom left, you have quantity lists for the auxiliary power unit (big diesel generators providing all the electrical power during launch) and the hydraulics.  The bottom right shows my tank pressures.  Typically the mission specialist and pilot are monitoring these so the commander can fly.  On the top left you can see my horizontal situation screen.  During this photo, I happen to be executing the fly-around the Cape.  You can see the three yellow markers that estimate my glide path in 30-second intervals.  I’m about halfway around.  If you look at the top right screen, it shows my vertical situation.  Check it out, I’m right on the centerline down path, in the box 5x5.  My nose is a little low though.  Take a look at the center screen.  That’s actually being fed from the backup flight system.  The Shuttle has five general purpose computers that work simultaneously.  During launch, four of them (maybe three, I can’t remember) are strapped together in a mutual voting scheme.  In case of discrepancy, the two closest will vote out the outlier.  Remarkably, the Shuttle happens to have an independent backup flight system.  This is not just another episode of the flight software running on another computer.  NASA commissioned an entirely separate set of software from a different contractor.  Neither the primary nor the backup knew what the other was doing, to avoid any mutual mistakes.  So the backup flight system is pretending to fly the vehicle home just the same.  As you can see, it predicted a slightly different flight path, which is why the center screen thinks I am flying too low. 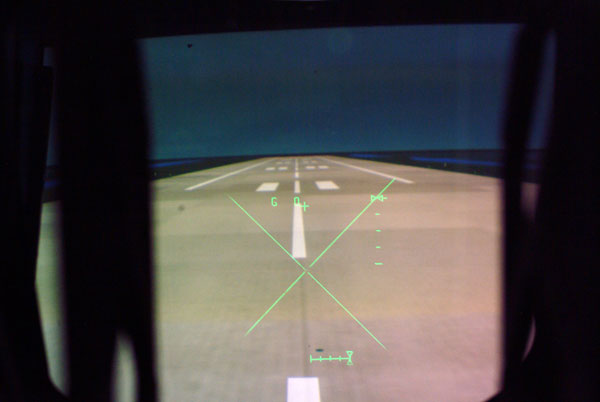 I did manage to snap a shot through the heads up display at landing.  Believe it or not I’m actually a bit left, though it looks like I am right.  That’s because I was trying to steer out the error during my flare while I had the ground effect aerodynamics.  Commanders compete on how close to the centerline they can land, so I didn’t want be left in the cold. 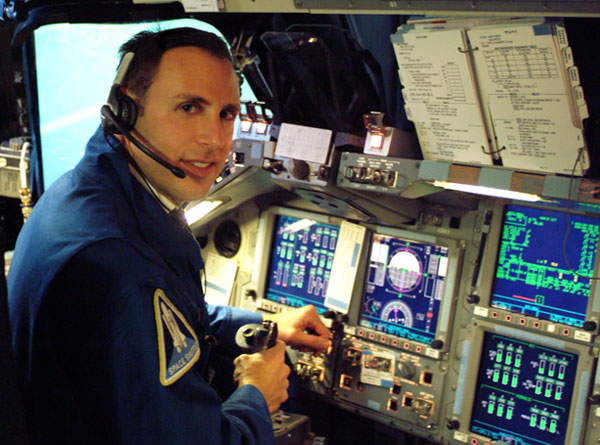 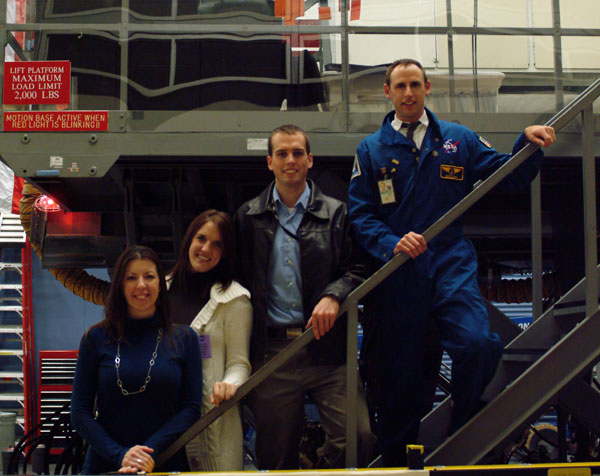 And finally me and “my crew” outside the motion-base simulator.  Yes, I know the collar of my flight suit was up.  It happens.

Are you on Google looking for Seth Jaffe? Or perhaps Seth E. Jaffe or even Seth Elliott Jaffe? You have found me in Houston, Texas working at NASA Johnson Space Center. Seth E. Jaffe is an aerospace engineer, photographer, and law student. Seth E. Jaffe and Seth Jaffe attended Casady High School in Oklahoma City, Oklahoma graduating in 1989. Soon after he attended Davidson College in Davidson, North Carolina. He graduated in 1996 from University of Texas at Austin with a degree in Aerospace Engineering.  He also attended Rice University were he studied Portuguese.  This little write-up has served to help Google and all of the rest of the crawling search engines find me so that I may turn up in your web search for me as opposed to the actor or the environmental attorney--both of whom have stolen my name. Happy hunting.